Then and Now: Doggie Edition

Since this blog retained all my old posts from 2007-2013 I have been going back and reading them and I’m working on a Then and Now post because it is funny how the more things change the more things stay the same. That will take a while to get all that together so, in the meantime, I wanted to post some pics of the puppers! 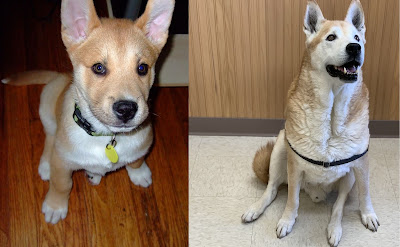 We adopted Argos when we was just a little over 2 months old. At the time, i was a total cat person but James had moved in with me (scandalous!) and he really wanted a dog so he kept showing me adorable dog pictures and this handsome little fella finally caught my eye. We went to Young Williams Animal Shelter just to look at him. His whole litter of 5-6 was there. Some had the pretty blue Husky eyes but we couldn’t take our eyes off this guy. His given name was Thad and he was an absolute jerk! He was taking all the toys away from his siblings then dropping them only to go steal another one. He still had his calm demeanor but was still owning the show.

We brought him home and changed his name to Argos (The dog from the Odyssey) hoping he’d be as faithful. He is still a jerk, he only comes when he wants to and he knows he is big so if he doesn’t want to go somewhere then he just sits down but he is also still very loyal. He still lays right in front of the door until we return and has even protected us a few times when needed even though he is the friendliest dog you will ever meet (to both dogs and humans). Everyone that meets him instantly falls in love with the gentle giant.

We did the DNA test on him and he is a Husky/Malamute/Labrador mix. We recently moved to Chicago and he absolutely loved it. It would be -13 outside and he’d want to go sit on the porch for a while! Spring is finally here, it is sunny and 71 today. He still wants to be outside but the sun is rough on a husky mix. In fact, he just kicked me out of the only porch shade. (there’s that jerk side again...). He is pretty spoiled but how can I resist that handsome face??

I’m so glad James talked me into getting a puppy. He is such a unique dog and has enriched our lives 100x over. ❤️ 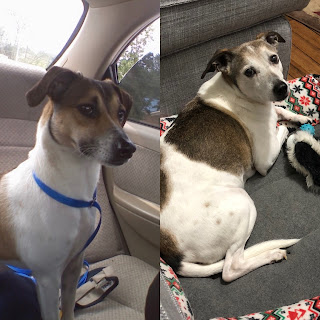 Major came to us about 2 years later. We had just moved to a new farm property where Argos was free to roam and he kept breaking into the neighbors fence to play with their two Goldens. The guy kept threatening to call the pound on us and we were having trouble containing him. Huskies are freaking escape artist! Then my sister got pregnant and asked us to dog sit for the first 2 weeks when she brought the baby home. Even though there was the normal dominance issue at first, the dogs got along pretty well and Argos stopped bothering the neighbors. Major was a rescue that we think came from an abusive home. He was very timid but his bodyguard Argos seemed to calm him down. So, here we are 10 years later and they are inseparable.

Major is our little cuddle bug. His DNA came back as 50% Rat Terrier and 50% total mutt. I imagine it like one of those romantic comedies where some snooty pure bred royal decides to "slum" it one night and ends up finally letting loose and falling in love and thus Major was born! He doesn't care for other dogs but to humans he is the most lovable dog in the world. All he wants in this world is food and snuggles. For the longest time he wanted to sleep with us but we wouldn’t let him so finally he just started jumping into the bed in the middle of the night so we’d just wake up and he’d be there. He is a little too smart sometimes... so we finally gave in and now I can’t sleep without the little guy curled up right beside me. ❤️

Our dogs are definitely spoiled and truth be told, they actually run the house but that’s a fair trade for all the love and joy they give us. I wouldn’t have it any other way!

If you are looking for a lovable companion, please choose to save a life by adopting. Don’t support the immoral business of breeding. It’s never okay.

To be honest, I didn’t even realize Blogger was still a thing. I started this blog back in 2007 and continued to write off and on until 2013 but then walked away and completely forgot about it. That was about the time that social media really took off so blogs didn’t seem as relevant. Over the years, lots of studies came out that social media is bad for your health. Regardless if those studies are true or not, I definitely found myself wasting too much time endlessly scrolling facebook and instagram and noticed my brain feeling numb or disengaged.

So, I decided to do a 30 day No Social Media challenge.... and never went back. It was so liberating to finally break the addiction. I found myself being more productive when i had free time. Before you roll your eyes, “productive” doesn’t have to be “work”. It includes fun things like reading an article about something I enjoy or researching new activities to do around town. I’d search for new recipes and fashion advice. My free time actually became beneficial instead of brain numbing! I was so happy!

But then we went on a trip and i had no where to share my pictures. I had a backlog of adorable puppy pictures that i just had to share with the world and no where to do it! So recently I thought about starting a blog but wasn’t sure where to start now. It seems the world is obsessed with Squarespace and Wordpress, etc. I consider myself decently tech savvy but those sites are too complicated for me. I don’t want to design my blog, i don’t want to customize my format. That’s too much work.

I just want to write. (And easily share the occasional dog picture...)

That’s when it happened... I typed in “blogger.com” and since Google bought them, it automatically logged me in and POOF! I was transported to a magical land of nostalgia with all my old posts! Not to mention, Blogger is extremely user friendly, they even take care of the domain for you! I am so, so happy to be here again!

So, after 6 years, Running for Fries is born again. Still perfectly relevant to my life without changing a thing (more on that in a later post). Grab some popcorn and settle in, I have a lot to say. Add me to RSS or bookmark my site and check back often. This is the new (old) home for all my adventures and thoughts! I hope you’re as excited as I am. ☺️

Hi! Welcome to my blog! This place has a lot of history, I started it in 2007 but then forgot about it when the social media boom hit. I have since quit social media but still wanted a place to share my travels and experiences so I found my way back. I'm not doing this for money so you won't find any ads here, just a girl and her thoughts. I hope you enjoy!